The American Foundry Society’s technical library has been rededicated to honor the legacy of two metalcasting professionals.

The Peters-Robison AFS Metalcasting Library is named in memory of the late R.D. “Butch” Peters and the late Stephen T. Robison. Approved in a resolution adopted by the AFS Board of Directors on Jan. 31, the rededication was officially unveiled during the Volunteer Leadership Awards Luncheon on April 24 at CastExpo 2022, where Technical Council Chair Dave Weiss read the resolution in full.

The original Cast Metals Institute (CMI) Library was named for Peters, who was 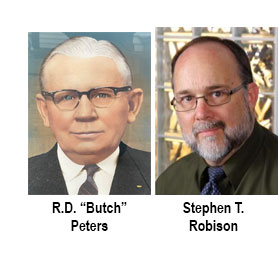 president of Brillion Iron Works from 1933-1973. He was recognized for his longstanding dedication to metalcasting education and for contributions made by the R.D. and Linda Peters Foundation to CMI in the 1980s.

Robison was an industry veteran who worked for AFS from 1995-2022. At the time of his passing, he was Chief Technical Officer-Emeritus for the Society. Throughout his career, Robison advanced the goals of fostering metalcasting innovation through research, technology transfer, scholarly publication, and technical assistance. Robison was passionate about administering and expanding the library as a resource for the advancement of the industry.

“Much of Steve’s work at AFS was committed to furthering research and supporting our technical committees. Members and peers knew they could always turn to him for technical advice or a helping hand,” said AFS CEO Doug Kurkul. “Both he and Mr. Peters were great supporters of metalcasting knowledge-sharing, and it’s our great privilege to honor their memories in this way.”

The Peters-Robison AFS Metalcasting Library is the world’s largest metalcasting technical library, containing more than 16,000 articles ranging from the 19th century to today. AFS members have full access to the entire print and digital collection.