The annual AFS Environmental, Health & Safety Conference is the singular event for foundry industry EHS professionals to network, benchmark and learn from each other. Attendees will share case studies of successful EHS projects, hear about cutting-edge issues from EHS and regulatory experts, and meet with vendors of EHS equipment and services. Join your fellow EHS peers in Birmingham, Alabama for the 33rd AFS Environmental, Health & Safety Conference.

Exhibits are now sold out.

Sponsors will be included in pre-event marketing online, on our website, and in our communications. Sponsor logos will be formally recognized during the event, during presentations, and on-site on posters. AFS will also distribute a list of conference participant names and contact information to each sponsoring company. Sponsorships are $650.

To become a sponsor, email completed form to Ben Yates at byates@afsinc.org. 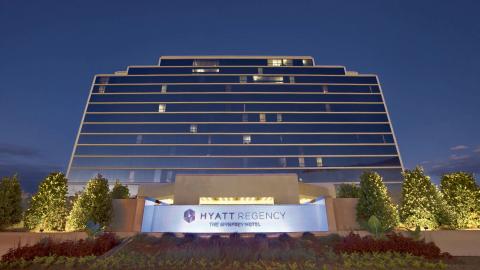 Connected to the Riverchase Galleria Mall, the Hyatt Regency Birmingham is a chic, upscale hotel in the heart of Hoover, Alabama. This former Wynfrey Hotel in Birmingham, AL blends traditional Southern hospitality with all the modern conveniences of home.

Reservations can be made with the Hotel by calling the hotel directly at (402) 593-5098 and mention the AFS room block. The room rate is $159.00 a night. The room block cutoff date is Sept. 11, 2021. Any reservations made after the cutoff date will be accepted at the group rate based upon availability.

McWane Ductile Utah’s energy audit identified an outdated compressed air system that was using approximately 27% of plantwide energy use. The system received two upgrades: 1) The outdated rotary screw compressors were replaced with new, more efficient centrifugal compressors. The new compressors automatically adjusted output to meet demand. 2) The main compressed air line was replumbed to eliminate the former loop system, making it easier to isolate sections. Energy consumption was reduced by approximately 2500 megawatts per year, which was approximately equal to eliminating 2600 tons of carbon dioxide emissions per year. The cost savings were estimated at $190,000 per year, with an RI of 2 years.

The judges were impressed with John Deere’s determination to work past numerous hurdles and to find a cement manufacturer close enough to accept their spent foundry sand on a cost-neutral basis as compared to their prior local disposal method. John Deere Foundry staff showed persistence and determination in working out storage issues, quality control processing, and transport issues to make a viable arrangement to reuse the spend foundry sand rather than continue to send it to their local quarry, which was running out of space.

AIR TOXICS REGULATIONS: THE NOT SO SLEEPING GIANT - GOING WHERE MACT AND GACT DIDN’T

UNDERSTANDING PFAS FROM A FOUNDRY PERSPECTIVE

ENVIRONMENTAL SESSION FOR “METALCASTERS ONLY”

WHY ARE MY CUSTOMERS ASKING SO MANY QUESTIONS? CUSTOMER DISCLOSURE REQUESTS (REACH/ROHS/PROP 65/CONFLICT MINERALS/CARBON)

The metalcasting industry is experiencing increasing demand from its customer base to provide accurate information to assist in satisfying the requirements of elective and regulatory programs to better understand the sourcing and composition of cast products, and potential impacts (if any) to the end user. From the metalcasting facility perspective, this presentation will provide a review of the various programs that may generate such requests, what types of formats these requests may be received by your facility, and case study examples of how such requests may be satisfied.

AFS Washington Office will provide key updates on EHS legislative, regulatory, and policy developments impacting the metalcasting industry. The Biden administration promised to increase OSHA’s budget, grow the number of inspectors and generally ramp up enforcement. In particular, we will focus on the new rulemaking efforts under development that will impact foundries, as well as a enforcement initiatives and recent fines

Discussion will be focused on the current status of applying real-time sampling methods in this application, including capability to:

OH NO, THE INSPECTOR IS HERE

How to successfully manage visits from regulatory Personnel.

Enjoy networking time with exhibitors with hors d ’oeuvres, & refreshments for all.

The Biden administration has made worker safety a top priority. This session will take stock of what has happened at the Occupational Safety and Health Administration (OSHA) during the first ten months of the Biden Administration, as well as provide a look ahead. We will hear about the new OSHA leadership team, ongoing enforcement efforts surrounding COVID-19, enforcement priorities and strategies, and upcoming rulemakings that will impact foundry operations.

MANAGING THE CHALLENGES OF COVID-19

One company’s approach to protecting team members from COVID-19 while continuing to operate all locations. This presentation will provide an overview of McWane’s approach to handling the many challenges the pandemic presented to manufacturing operations.

MANAGING THE CHALLENGES OF COVID-19

USING LEARNING TEAMS TO IMPROVE SAFETY (AND QUALITY AND PRODUCTIVITY!)

HEALTH AND SAFETY SESSION FOR “METALCASTERS ONLY”

Substitutions will be accepted anytime. However, cancellation of registrants with full refunds must be received in writing by September 5, 2021; no refunds will be granted after that date. In the unlikely event the conference is cancelled for any reason, AFS liability is limited to the return of the registration fee.